REMINDER….YOU CAN CLICK ON ANY PICTURE TO SEE IT LARGER AND USE YOUR BROWSER BACK BUTTON TO RETURN TO THE BLOG.

It has been so hot and muggy this Labor day weekend that even the Direct Tee Vee reciever quit working
I quit about lunch time and came in the house to cool off….

had to call Direct Tee Vee because Maries kitchen set was not working….They sent a guy out this afternoon and he has fixed it and gone….the reciever itself had quit working….He replaced that and commented that the connectors looked old and replaced all the connectors on all the cables….and changed out the head on the dish….

I have been cutting grass and sowing new fall cover crops….Took most of the day Saturday just to mow the lawn….It was growing faster that Pete could keep up with it…..Pete has a preference for bermuda
grass…we have a lot of bermuda and crab grass in the lawn and Pete will select the Bermuda…

I have commented before on my rig for sowing cover crops….below is a photo from yesterday…I broadcast the seed and then bush hog the residue and roll it with the aerator…. 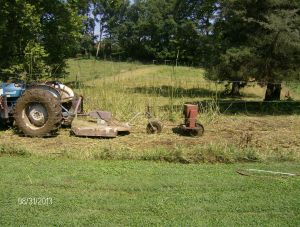 this is what the field looled like after the cows had been through it….mind you this was just two cows and two heifers…. they disappeared into the jungle and I did not see them until I called them out for their evening handout….I give em just a taste of grain in the evenings to keep them coming to the barn when I call them….really makes life easier particularly in the winter….
This field carried them a bit over two weeks. 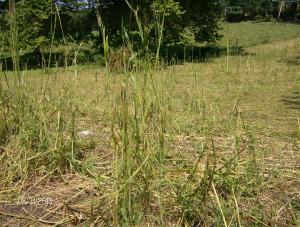 the not knocked down stalks were taller than I can reach….this one probably was 18 inches higher than I could reach….the field was covered in them….these millet and sorghum stalks are all that are visibly left. I was at Keenbell this week and in the field that they grazed and the buckwheat and cowpeas and clover and the millet were all regrowing and most was head high on me again….

I decided to go ahead and plant mine to the fall cover crop…. 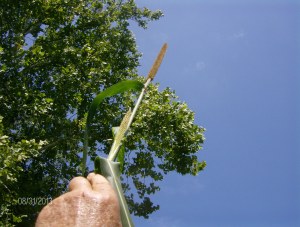 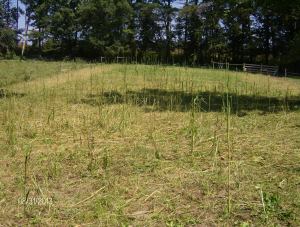 while it look slike they ate it all….there is a good bit of residue on the ground…. 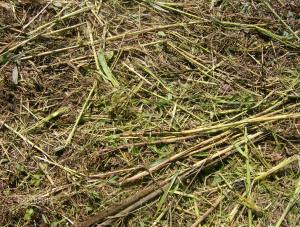 here is what it looked like after seeding and rolling. then we had a little shower last night…less than 2/10 of an inch….buty I would rather be lucky than good.

I planted another smaller lot this morning….but I did not mow it…It was a grass lot that was grazed by the horses about a week ago…I broadcast the seed and then ran over it with the aerator roller…. 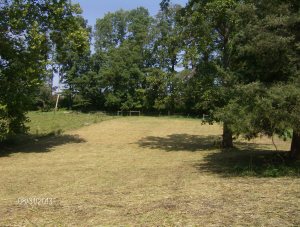 Here is a shot of the variety pack of cover crop buckets that I planted for display at the Virginia State Fair.
all did well except the pure turnips and I replanted that one and it is coming on now…. 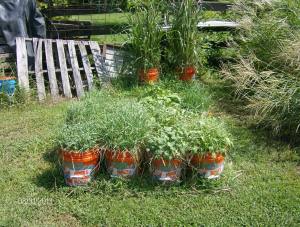 Even the summer cover crop buckets that were grazed inadvertently by the brush abatement crew are recovering nicely now. they may be fit for display as well…. 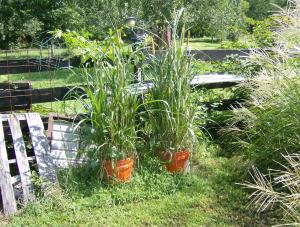 The obligatory picture of Pete waiting for his evening cookie from Marie….he has figured out that if he hangs around the front poorch sooner or later he will get a cookie…. 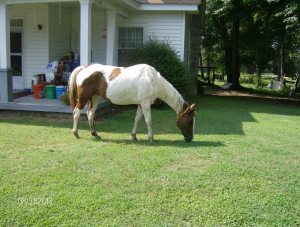 Apache and Pete….Apache is a little jealous of the attention Marie pays to Pete…but he is a good boy and he and Pete get along well…. 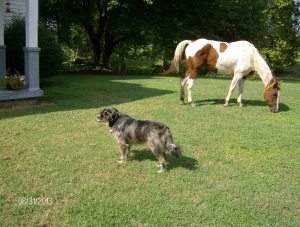 Stewart saw Pete on Sunday and says he looks like he is gaining weight….I see him too much and can not see him gaining yet….He is still ouchy on all four feet but he is no longer hopping….I think he might make a nice looking pony some day…..he is still easy to get along with and know his name when there is a treat or feed involved. 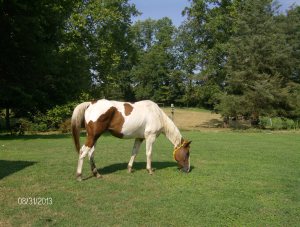