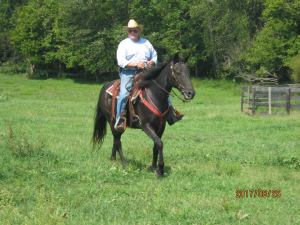 Well……I did something on Saturday that I never would have even dreamed of doing just a couple of years ago.

I loaded Condi in the trailer and Stewart in the van and we embarked on a journey to Warrenton.

Our first stop was at the Dennys in Ruther Glenn for a grand slam breakfast. Then it was on to Skeeters Saddlery in Warrenton. The goal was to have Condi fitted for a saddle that would be comfortable for her as well as for me.

We were all surprised at how wide Condi measured out. She and I are both a little fluffy, but it is what it is and she is not that much over weight. Skeeter asked me why I wanted such a big horse and I told him he should have seen my big horses. Condi is the downsize. Besides I did not want anybody feeling sorry for my little horse having to tote my big self and he just laughed.

We designed the simple saddle I want and I am more satisfied that it will be at least as comfortable for Condi as it will be for me.

Stewart and I plan on riding a lot now that he is feeling better and we are much nearer neighbors now. And after I retire next year we are going to ride even more as long as our health holds out.

Skeeter helped me design what I wanted and Stewart gave me his input every time I asked. Stewart has a much better sense of style than this old country rat.

I am looking forward to it, but being custom made it will be a couple of months. Skeeter told me that he has two ahead of me. He explained the process and that this would fit right into the work flow.

Skeeter also inspected both of the saddles I have and declared them both to be safe and serviceable. One is the part synthetic and part leather Circle Y that I have been riding since I first got Palladin Perkins. The other is a Big Horn roping Saddle that my dad bought used when I was a kid. It is nearly as old as I am. I rode it all through my teen years and nearly daily for the ten years I was doing cow work. It has been through a few wrecks but it is good to know it is still serviceable. It is heavy as the devil though so I probably won’t use it much.

We were back at my house by 1:30 and I even had time to weigh my heifers. For a dry as it has been and not having much grass, I was very pleased to see that they are both gaining nearly one and a half pounds per day. One of this falls calves who is about 45 days old came in with them and I weighed him as well at 184 lbs. So he is gaining about 2.5 lbs per day as well. Tickled with that. Both cows with calves seem to be milking well but not loosing condition too badly. As long as we get them bred back on schedule all will be well.

The only reason I have grass is my multiple paddocks and rotational grazing. I don’t have a lot of grass and I am nearly out but the heifers are still growing and I was not expecting that.

All in all a very nice day yesterday and this morning it is raining. While the rain kept us from riding today, we need the rain and heeding the prediction is why I scheduled the trip to Skeeter for yesterday.