REMINDER,,,TO SEE ANY PHOTO LARGER SIMPLY CLICK ON IT….USE YOUR BROWSER BACK BUTTON TO RETURN TO THE BLOG

Below is Dee Dee on alert…Dee is the watch dog…she does not miss much….she is pretty much a homebody and like to stay close to her people…she is asleep next to my chair as I type this….Not real big but wiry and fast and getting to be very protective of the place and Marie… She likes to stay close and Apache is the free spirit and the adventurer…Dee is pretty Conservative and cautious….

DEE DEE IS THE WATCH DOG,,,,ALWAYS THE FIRST TO ALERT

But all she had to do is sound the alarm and the enforcer is pretty quickly going to show up….He is the Guard dog….If I tell them somone is all right they will accept them quickly….but if I don’t tell them, they snarl and bark enough to keep you in your car….Marie says that during the week, whenever anyone comes to the door that they are very protective….

APACHE IS THE GUARD DOG

Pete is the guard horse….He still is not sound enough to deal with the boss mare so I keep him in a little lot near the stable and trun him out when I am home ot graze in the yard….when he sees my van in the evenings now he goes to his gate and nickers….I shut the gate to the highway and open his and he comes out and grazes….he soon makes his way ot the house to see if Marie has any cookies….

Yesterday I was mowing a paddock and looked toward the house to see him standing next to the sidewalk and looking in the front door looking for Marie….I called her and told her to go to the door….he got his cookie and went back to grazing…

PETE HANGING OUT BY THE POORCH WAITING FOR COOKIES

I think he is putting on a little weight….He is still pretty lame in the front feet but the back seem to be getting better….Julie says he has so much undermining of the sole from all the abcesses that it is going to take a while for him to come around…

while grazing he has demonstrated a marked preference for the bermuda grass….he grazes the bermuda grass right down to the dirt….then he moves on to the other grasses…we actually have some bluegrass in the back yard and he does go back there and nibble on it sometimes but I think he wants to stay in the front just in case of a cookie spill…

PETE GRAZES THE BEDRMUDA GRASS INTO THE DIRT

He did manage to find my root boxes….These are boxes that have plexiglass panels so we can look at roots growing throught the soil….this one had a tillage radish and some winter peas growing in it….OOPHS…that one ain’t coming back because he bit the growth point off with the top of the radish….

WONDER WHO DID THAT???

This rootbox has tillage radish and oats growing in it…. 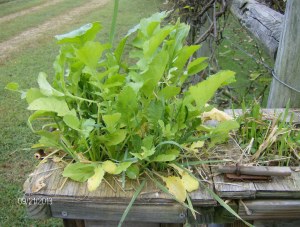 RADISHES AND OATS IN THE ROOTBOX

this one I had to reseed…it has barley and crimson clover coming up well now….don’t know why the original seeding did not take…. 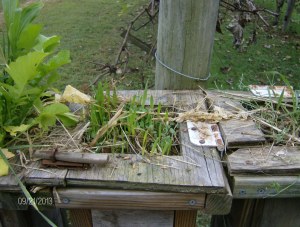 Thank goodness my cover crop buckets are doing okay….one bucket got a little too much water and the ryegrass has wilted back pretty badly but the others are doing well….I didn’t put drain holes in the buckets because I was hoping to salvage them after the cover crops…. 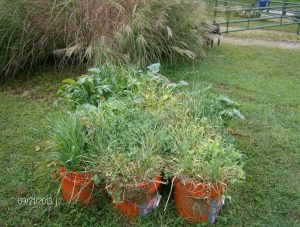 This is a photo of mustard blooming…this is mustard from last years fall mix. we used regular mustard and it is tall and somwhat spindly and is the first victim of the cold weather. This year we used a forage mustard in an effort to get the aleopathic benefits of mustard as well as increase the biomass…now I have to learn to distinguish it from the rape and the radishes,,,

THE MUSTARD IS BLOOMING

I have mustard blooming in this field with sorghum sudan and millet six feet tall because after grazing the summer cover twice, I broadcast a hodge podge of seed on the paddock…I don’t even remeber how long ago…I have it recorded but do not recall. I do recall that I used a hodge podge of leftover seed of all types including some fall mix from last year and some summer mix…So now I have a very diverse paddock with buckwheat and sorghum sudan and millet as well as radishes and rape and mustard and crimson clover…I don’t see much cereal grain but there is also a lot of pasture grasses in the paddock….everything from fescue to crab grass… 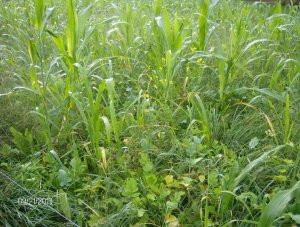 Below is the former bull lot that has become the poster child for cover crops on my place. This is the paddock that I mowed summer cover and reseeded on Labor day weekend….three weeks ago….a lot of the green is still Sorghum Sudan and millet…both regrowth and new seedlings from the old crop…but there is a plethora of the new fall seedlings as well…rape and radishes are very evident and the cereal grain wheat and winter oats are coming up but hard to see yet…The new crimson clover is not yet visible but that is normal and I do not know what phacelia looks like and that is a new species in the mix this year along with the forage mustard. The mustard and radishes both have some aleopathic effects and this year we switched to forage mustard to increase biomass.

This is another shot of the bull pasture that is an attempt to show the radishes and rape among the summer annual grasses….I think next summer I am going to try some dwarf brown mid rib sorghum as the primary summer crop…I really liked what I saw at Blacksotne this summer.

I am also tinkering with the idea of planting the new field to warm season grasses…there might be too much shade there for them but It is a good place to give it a try and it will never work if I don’t plant some….Warm sesaon grasses take a couple of years to get establihed but the field is certainly not very productive now and I have little to loose other than the cost of the seed. Trying to figure out what grassed I want to try…probably Big Bluestem and Indian Grass and maybe one more. 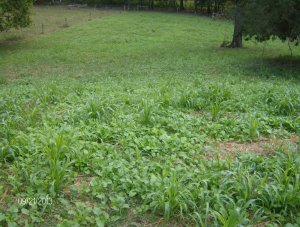 SUMMER REGROWTH AND RADISHES AND RAPE