As always…to see any picture larger click on it…use your browser back arrow to return to the blog.

It was a pretty weekend and I got a lot done and managed to take a few photos around the farm.

My garden is doing fair…looks like I once again am having some herbicide carryover issues with well composted manure on my tomatoes…three or four of them are showing the knurling that is the first symptom…. The promise of composting killing weed seed is false….I think it is a development zone for lambsquarter…fortunately lambsquarter is easily pulled and dealt with….I have it everywhere I put compost on my garden….

But the cover crop which was broadcast on my garden last fall is really pretty now on the part that has not yet been mown. Photo below.

Sunday I spent a few hours cleaning up where I fed the horses hay in a round bale feeder during the hard weather….I did not realize how much was there until I started hauling…the bin on the left is old stuff that has composted…the bin on the right and the pile are new.

Part of the chickens are in a chicken tractor and I generally move it every two days or so and then broadcast some seed behind it and lately have taken to covering the seed with something…hay..manure…mulch just something to cover the seed. I did this all winter as well. this first shot is of seeds sown during the early winter…There is no pattern or plan to what is sown…I go grab a cup full of seed and broadcast it behind the tractor… 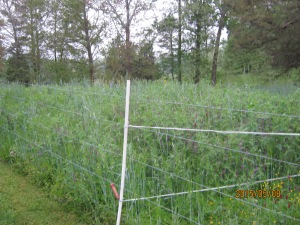 The below shot is the chicken tractor coming back for a second pass…the chickens are getting the benefit of their labors and harvesting the forage they helped grow….

Star Baby and Pete saw me out and thought they would encourage me to open a gate into a new paddock…but they will not go inot that one for at least another month….

My Kiowa Blackberries are beginning to bloom…I love those berries…

Several folks have inquired lately about Pete, the rescue we took in a while back..he is doing well..his feet have grown out nicely and he is sound all around and has gotten so stout that we had to cut his groceries back a good bit…He is a people type horse and loves attention.

Below is another shot of my bull lot cover crop…Easily seen are rye, barley, vetch, crimson clover, winter peas and rape.

And to close things out…Pete says, “If you don’t have any treats, I’m going to the stable.” 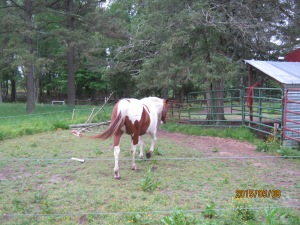