This weekend it was finally green around the poor farm….I helped Court work cattle on Saturday and then they went out to pasture….

First I need to report that my broadcasting of seed in the cutover area was at least partially unsuccessful…..The oats were too easy a target….When I went up to check the ground was littered with oat hulls….too early to tell the fate of the smaller seed varieties.

But I do have lots of nice vetch coming up in quite a few paddocks….I did not see much sign of it during the brutal winter but it is starting to jump now….no blooms yet but it is growing visibly daily now….

Below is a shot of my chicken tractor tracks….actually this shot is from about two weeks ago….the small grain is about a foot tall now on the two green rows and the third row is greening and we are most of the way back on a fourth row now….I move the tractor about every two days and drop some seed behind it and lately I have been mulching the seed with either hay or straw or compost or manure….mulching seems to help dramaticly.

Then there are two shots of small paddocks that were grazed at the end of last week….three horses and two mini donks ad easch paddock was grazed one day and then some seed broadcast and the gate shut….over the weekend they went to a larger paddock in the back for three days and sunday they went to another yet…the large paddock in the back was not grazed quite so closely nor was it reseeded. 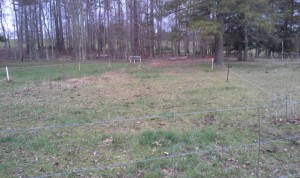 Shed lot B after grazing 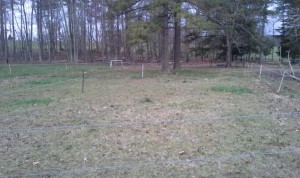 shed lot A after grazing

My guardians were with me every step of the way… 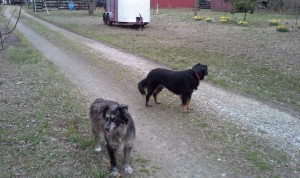 these are the daffodils around the graves of the previous guardians….they also have a decent crop of day lilies that have broken ground around most of them…

daffodils around the dog graves