As always you can click on any thumbnail to see a larger photo….use your browser back button to return to the blog.

I just took a couple of photos of things the other morning when the dogs and I first went outside to feed hay and water stock and get some firewood.

this first one is simply the young dogs and their daily run/wrassle…..the snow would hold then today so Dee Dee was fine with running in it….this was the wrassling part….they will wrassle a while and then they will run a while

this was the running phase….gosh I wish I had some of that energy….

below is a shot of the paddock that has been the sacrifice lot for Pete and the brush abatement crew….when weather is bad I hang hay in the stable…but if the ground is not rotten or the weather falling I put the hay outside on the ground…..between the hay and the poop piles the lot has been pretty well covered…..my plans for this lot….as soon as there is somewhere else for them to go I am going to shut it off and see what happens….I had spread some clover and cover crop seed in late fall and there is a world of grass seed from the hay….lots of organic matter….the donkeys created a poop spot years ago and I know I will have some dock come up there as it has been there for a couple of years now….good job for the brush abatement crew when they come back to it… 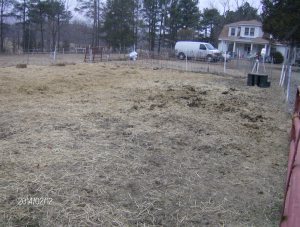 this is the same paddock viewed from the other end….naturally these photos were taken just before the snow.

below is just a shot of the house from the area of the barn and stable….I had taken the tractor and broken a tract to get out to the road….

Pete heard me about and he came out to make sure I was not throwing away any treats….He was running and bucking and playin in the snow today….

Perkins has claimed this spot in the barn….he is looking over the headlocks as this is the area where I use to feed the heifers daily….Perkins thinks it makes good equine accomodations. 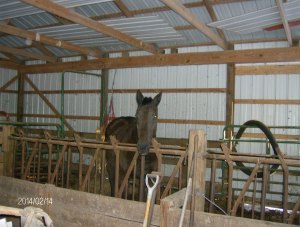 And this is where miss Star Baby spends most of her time….she likes to see out and the roof gives her some protection….if the wind gets up she will back into the barn but you can usually see her head….

today has not been cold but the wind has been fierce and everything is so muddy that not much can be accomplished so I am reduced to typing and playing with pictures….