As most of you would know by now I do a lot of rotational grazing….

On my small place we have three grazing groups.

first there are the equines….Star Baby, Palladin Perkins and the two mini donks Jonah and Esther. They pretty much have the front of the place. Then there are a couple of cows and heifers and they have the back. This year we have two young bulls and they have a corner in the back…

It has become my routine since last fall to sow whatever paddock was grazed during the week to some sort of cover on the weekend after grazing….during the late spring and summer I put out a good bit of summer cover and since late august or early september I have been sowing fall type stuff…

This weekend I sowed three paddocks. One for the horses and two for the cattle….
Below is the paddock I sowed which the horses had grazed. This was a paddock that I put a summer mix on late in the summer….I had to go ahead and graze it as the weather forecast is calling for frost this week and with these summer grasses the feed value is lost after frost, plus the danger of prussic acid poisoning after frost….so I let tthe horses have them mid week and sowed and mowed on saturday….this field I broadcast Rye, Winter Peas, Crimson Clover and some Ashland Pasture mix. then I mowed it and as I mowed dragged an automobile tire over it to scatter piles…. 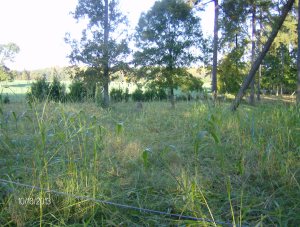 Equines grazed just before the frost[/caption]]

In the cattle area I sowed two adjoining strips which had been grazed. this was the last cattle grazing in the strips for a while….

On Saturday My last cow to calve was in what I thought was early stage labor when I went outside…Walking and bawling with her tail stuck out a little…this is a mature cow and so I went about my business thinking she was fine….In fact I went up front to sow the horse paddock. when I came back the cow was lying down straining but not doing much…actually only saw her strain once and she got up and walked off….this is not uncommon behavior for some cows….

So the dogs and I went in and had lunch. When I came back out the cow still had made no progress…now I was worried….I gathered my obstetrical supplies and then went and walked the cow up to the barn….I gloved up and went in rectally and my worst fear was confirmed….calf was coming backwards and butt first…..it takes and exceptional cow to be able to get one out in this presentation without assistance. I had one cow do it once but it took a lot out of her….

so I regloved and went in on a fishing expedition for feet….I could tell early on that the calf was not moving and was probably already dead….I got hold of the left foot and pulled it up pretty easily…the right one took a while…the arthritis in my right hand was an added bonus that slowed things further….but it was the right hand that finally grabbed the foot and got it started up and out. Then I applied the calving chains and the delivery was pretty easy….

but the nice heifer calf was expired….I tried all my tricks at resucitation but there was no heart beat and no breathing….

So we had a fifty percent calf crop this year.

Later I saw my neighbor and he is awash in grass and he invited me to put my cows out with his….Not having to be on maternity watch any more I took him up on his offer and let my herd and his red heifer out with his cows….

Back to cover crops…..

below is a photo of what has become my all star cover crop plot….this is the plot I sowed on Labor Day week end. The tall stuff is a combination of new seedlings and regrowth from the millet and sorghum sudan that was grazed and mown before new seeding. The frost predicted this week will add it to the biomass for the field.

A closer look shows that the summer cover is not dominant….the rape and radishes and forage mustard are thick and growthy….this is the salad which I picked and Marie cooked last week end. 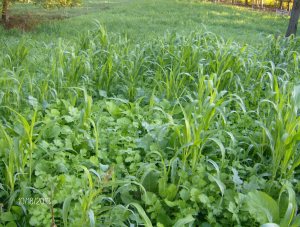 It will be interesting to watch the phases of this years cover crops….certainly these three are dominant now and the small grains and crimson clover have to be searched for in this field….

I have sown a good bit of winter oats in paddocks this fall….I am liking them…they come up easily and well and are growing at a rapid rate…. 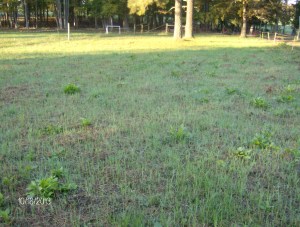 This paddock was a horse paddock that was grazed and sown about three or four weeks ago…..It had a lot of grass residue at the time….part bermuda and part orchardgrass…oats and crimson clover are what was sown…I sowed rye this weekend but think I will try to find another bag of winter oats…will probably have to order them….hard to find around here.

here is a fairly good view of some of the cover crop paddock in the horse area as seen from the road. so of these have been challenged as the brush abatement crew seems to have an appreciation for them….with single wire fences for the horses the brush abatement crew is confined only by the perimeter fences….I am not complaining as the last brush abatemetn crew refused to be confined at all….this crew is actually performing their desired function….they for the most part stay close to the equines and they certainly are beginning to make a mark on the brush and sspplings that have become numerous…just yesterday the horses were grazing and the goats were on their hind feet harvesting sweet gum leaves….I am in a project of cleaning up the fences and am hopefully that the brush abatement crew will assist in keeping them clean….the down side is that they are the reason the cover crops on the the cattle side are doing better than those on the horse side…. 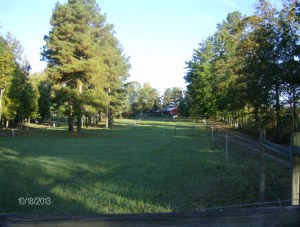 view of cover crops from the road

We rode around the field and then rode up to the cows…the cows wanted to gather around Perkins and my cow that has a calf can be agressive so we had to push em back a little…they quickly gave ground to him…Suprisingly Perkins liked that….He liked working the cows….So we decided to walk them around a little bit and had a training ride….we took the whole herd easily around the field and up the hill to the gate to my place….I really think he enjoyed it…I know I did….then we made a loop around the field and back to the stable…Couple of miles all together….on a beautiful day on a good old horse.

As usual Miss Laid Back and Mr. Intensity are keeping an eye on things….here they take a break from their biathalon of racing and wrestling….

Miss Laid Back and Mr Intensity