This is just my weekly post of cover crops at the farm and other shots becasue I had a camera in my hand.

this first one is in a neighbors corn field….what this shows is depression of the corn crop in a low area by too much water….at least it was not flooded out and drowned as has been the case in many low spots….both corn and beans

The multispecies cover crop in buckets….getting crowed in those buckets and even with all the rain we have had it is hot between rains and I am haivng to water these buckets….the buckets do have drain holes in the bottom so they do not hold water….

This is the cover crop in the bull field….the white fence spacer in the photo is five feet tall…so the cover is jumping….this spot is near where we fed hay two winter ago so there are probably some residual nutrients there but the rest of the field isn early as tall.

Day Lillies planted last year at Po Devils Grave….Po Devil was a blind old hound that Marie took in a few years ago…someone had dropped her because she was blind and old….she had a couple of good years in the house with us….

This is a shot of a small area near the cow barn….for years it was part of the yard and was mown weekly…finally I got smart enough to put up a little hot wire and let the livestock mow it…There never was much in grass…and I had to mow it after they grazed it….this winter I broadcast a clover mix over it…about five or six kinds of clover….the horse have grazed it twice this year and it has been mown once….it has not been touched in about a month and now there is bermuda and clover about 18 inches tall….

another shot of the bermuda and clover patch.

planted galdiolas around the dog graves last year and everyone told me they would not over winter…most of them have come back this year and Monte has the first ones to bloom. 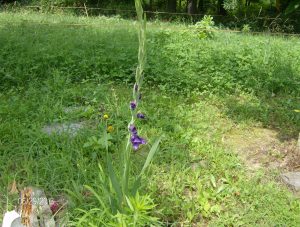 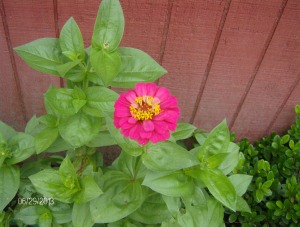 this is another shot form th ewet area in my neighbors corn field….the corn stair steps up form two feet to six feet.

just a shot of the sweet yellow clover in the bucket….I have a good bit blooming in another field where I had planted some cover last fall….hopefully it seeds easily. 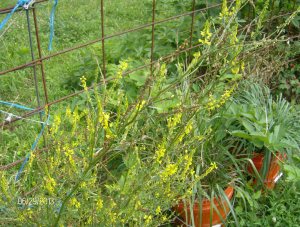 this is the standard weekly shot of the summer multi specis cover crop swon in two parts in the bull field….about 4 feet tall and some sunflowers are beginning to show up….soybeans and cowpeas cannot be seen for the buckwheat…. 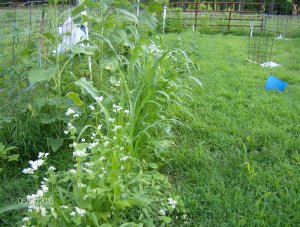 another shot of the zinnias

Hopefully I am going to make a visit to some of our producers summer cover crops and get some photos this week.